Rapid progress continues. We've got menus up and running better than ever, some really polished placeholders, fleshed out design notes, charts and graphs for pony stats, hundreds of character animation files, and most of the math behind the revamped battle system!

Get ready, his update's gonna be a doozy.

If you were wondering why a GIF of the Battle screen wasn't used as the header, that's because it currently looks like this in engine. Impressive progress to me, but not exactly eye-catching. 😅

State of the Game  Our work schedule this past month has been charted out with every other weekend being an intense 6-8 hour game jam where we focus on a specific feature and get it as close to finished as possible, then each of us spending the next weekend alone crunching away at whatever specific task is on our plate for the month's To Do list.

The weekdays consist of incremental progress and little things to check off before and after office hours, and chatter throughout the day about what things to tackle next or about the final vision of the game.

It's steady as she goes, and we're building the game to be played on actual mobile devices now. You still can only walk around, bump into walls, look through menus, and mess with variables behind the scenes with a debug window but when you list it all out like that that's kinda huge.

The game's three main components are the Battles, the Overworld, and the Interface. We've got two of the three going strong now, but it's time to focus on that super essential Battle component now.

About a week ago we've gotten serious about brainstorming ways to approach this aspect leagues better than the way I did it before (anyone who's played the glitchy build from 2017 has surely experienced the battle calculations being more than just a bit off).

Lots of consideration is going to the overall feel of the game. It's really nice splitting up the duties the way we are. Royal handles the code, architecture, formulas, and pipelines that he loves working on while Yotes focuses on the design, artwork, long-term planning, business management, documentation, and polish.

And then we've got brilliant musicians Bluco & Euleom to help fill the soundtrack with jams! Really makes it feel less like an insurmountable odd and more like an enevitable event. This game is coming out no matter what. Now it's just a matter of squeezing as much out of daily time as possible so the When becomes Soon.

Even the region's map has all it's pieces in place. Each location has its own sprite, icon, and handdrawn collision box. Each named and placed appropriately. This is an example of something that gets cranked out in a single day while I'm jamming out or listening to Let's Plays & Podcasts.

And then there's the stuff I like to idly fuss over during downtime in public places on my phone. Stuff like mathematically balancing the base stats of the ponies to match their descriptions and coming up with better ways to visualize all that information. 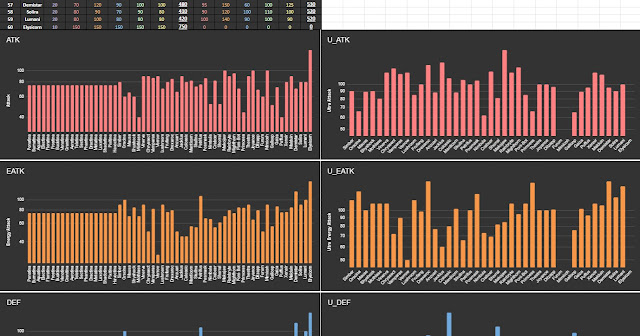 We fully expect balancing to consume months of development time alone, but the main mission for now is to get all the pieces of this math puzzle together. We'll find the fun as we go, but we desperately need something playable by April 9th when we fly out to San Francisco to put this game smack-dab in the middle of a brony convention.

We're even fleshing out ideas for a Local Multiplayer mode since we have to setup battle customization for testing purposes anyway. I mean, why not make it a feature, right?

Can't quite take on the challenge of online play, or at least at launch. But there's some pretty sweet ideas floating out there in a top secret document. 👀

There's tons of new expressive animations going on too! All the ponies and people in the demo make different faces during cutscenes to make the world feel more alive than the typical zoomed out overhead RPG.

The characters of Battle Gem Ponies is probably the most essential part of the overall experience so I gotta make sure we get that right.

More stuff gets added each month as if productivity increases exponentially. Or maybe we're just still gaining momentum. Either way, I'm looking forward to a playable preview build up on the Yotes Games Patreon by the beginning of March at the latest.

Setbacks  Main dev setbacks starting off this decade are the hesitations and back-n'-forths work friends and I have about how to go about making a fun and balanced battle system with the current ideas that are in place. What should the formulas be? How will these stats start out? Which pony beats whom, and why? Are these multipliers too high?

8PM - An Hour or So of BGP til Exhaustion

Then on Wednesdays squeeze in an extra couple hours after work for an in-person at-the-battlestation BGP meeting with Royal.

Morale can be an issue for me personally. I can end up feeling completely burnt out by Tuesday most weeks. There's a lot of pressure to work-work-work and I can't even enjoy a moment to myself anymore because I feel guilty about possibly missing the April deadline for a convention we're featured at (they're counting on us to be a main draw for the Arcade and I've already started spending the $3,000 budget for the trip so there's no going back).

On top of that there's taxes, declining health, changing insurance, failed relationships, overtime, impostor syndrome, depression, workplace narcolepsy, family tension, computer problems, upset bosses, cooking mishaps, financial scams, and a couple thousand dollars of unexpected tax & health bills day-to-day and all in the same month pretty much. Not to mention with all the disasters we see in the news 2020 is off to some kinda start, huh?

I could probably fill a whole novel with the personal life stresses and hassles dragging down morale lately, but seeing Battle Gem Ponies come together week after week gives me just enough hope to forget about all that once I'm in my element.

One weekend of solid progress towards finishing BGP's first demo, and it's all smiles and excitement. I go to bed with an exhausted body that stayed up way too long, but a genuine massive sense of accomplishment because I know I'll be living the indie dream by the end of this year if I stay on track.

Big things are coming. The BABSCon trip is 3 months away and things are ramping up. The first playable demo since the calamity that took this project back to zero in 2017.

The recent success of the Pokemon-style indie MMO TemTem this past month has been inspiring to watch. Half a million dollars on Kickstarter, a Steam Early Access Launch getting tons of coverage all over the gaming web, and new YouTube channels forming specifically to talk about this game and others like it  in the wake of an irate Pokemon fandom getting fed up with the AAA industry's shortcomings.

Goes to show that there's tons of people out there looking for games like this and eager to support indies trying something giant companies wouldn't risk.

And the Yotes Games team is particularly eager to throw a hat into the ring and try to bring people an all-new evolution of the monster collecting RPG genre. We've got unique mechanics with tons of depth and a lovable cast of expressive ponies that are sure to capture hearts.

There's a pony for everybody, a skill floor that anyone with the ability to read can stand on, and a skill ceiling that aims to keep expert players entertained indefinitely. Hope you guys end up loving it as much as we do. More news next month, see ya then.

You can see the mid-month Patreon Exclusive progress posts here!

Thank you, for following the development of Battle Gem Ponies.